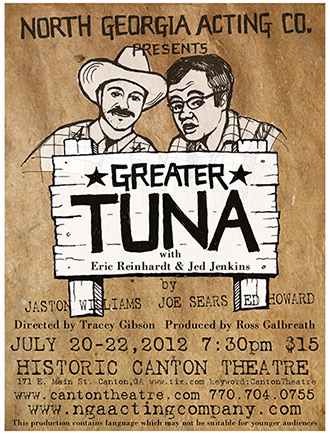 North Georgia Acting Company's production of 'Greater Tuna' will be at the Historic Canton Theater on July 20-22, 2012.

The two man cast, starring Eric Reinhardt and Jed Jenkins, is a hoot with 20 different characters set in Tuna, Texas. Directed by Tracey Gibson and produced by Ross Galbreath.

Click here to see photos from the Jasper performance.

This production contains language which may not be suitable for younger audiences.