Catching the Cure 5K and After Party at Rocco's Pub
Saturday, September 8th 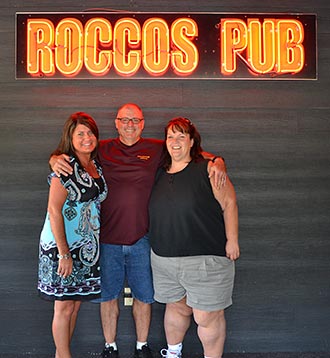 Stephanie Ray, now being called "The 5K Queen" around Jasper, and Christy Allen, a 3-Day cancer walk veteran, have teamed up together to put on this years Catching the Cure 5K on September 8, 2012.

Stephanie started doing 5Ks mainly for weight loss and has lost 50 lbs. since her first race. In her first 5K, she finished with a time of one hour and 20 minutes and has now beaten that time with her current time of 58 minutes. Stephanie knew that Christy had participated in last years Susan G Komen 3-Day walk in honor of of mother who is a breast cancer survivor and wanted to help her raise the required $2,300 for her 3-day walk.

Christy said, The 3-Day was one of the most amazing experiences in my life. When I felt like I couldn't take another step, there was someone there to cheer me on. I had an awesome team of girls with me. And she is going back this year to do it again. Even though after last years 3-day event Christy could not walk for two days and had to go to the doctor, she is still determined to go back and do it again this year!

But the FUNraiser doesnt stop there. Right after the 5K, there will be an after party at Roccos Pub for those who ran the race to celebrate and cool off, and also for those who could not participate and want to contribute and mix and mingle with Christy, Stephanie and the race contestants. There will be a wing eating contest, a corn hole tournament and a silent auction with great items donated from local business from the likes of: Van Goghs Hideaway, 31 Gifts, Doughboys and much more.