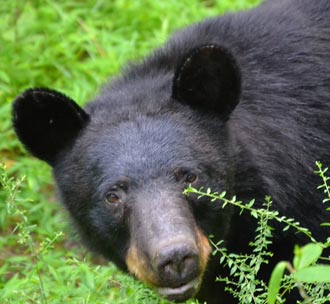 (GAINESVILLE, Ga.) - State and federal wildlife officials in North Carolina and Georgia announced an undercover operation today that involved about 80 wildlife violators and some 980 violations.

Primary violations documented by Operation Something Bruin stem from illegal bear hunting but include an array of state wildlife and game law charges. Some suspects could also face federal charges.

The four-year investigation, the largest of its kind in recent years, targeted poachers in North Carolina and Georgia, with work in some adjacent states. Included in Georgia are eight defendants facing a total of 136 state charges.

Dan Forster, director of the Georgia Department of Natural Resources
Wildlife Resources Division, said Operation Something Bruin is a great example of a multi-agency effort with a unified goal: protecting a public trust resource that provides tremendous natural, social and economic benefits to citizens.

It is incumbent upon us to ensure that we have sustainable natural resources for the public to enjoy for generations, Forster said.
And particularly in these economic times, its critical for us to work across geopolitical boundaries with other agencies to provide the best possible protection for the resource.

Officers with Georgia DNR and the North Carolina Wildlife Resources Commission infiltrated poaching circles to document violations including bear baiting; illegal take of bears, deer and other wildlife; illegal use of dogs; illegal operation of bear pens in North Carolina; and, guiding hunts on national forest lands without the required permits.

For those who persist in wildlife theft, Something Bruin will help agencies better train officers to catch them - an effort strongly supported by hunters and anglers, our nations first conservationists.

Conservation officers cannot be everywhere, Henderson said.
The public can be a great asset by reporting poaching and suspicious activity through their states toll-free report-a-violation line.

Wildlife belongs to everyone. Reporting poaching helps us protect something the public owns.

Fewer than 10 percent of all wildlife crimes are reported. Help change that trend and protect the wildlife we all enjoy. When you see or hear of a possible violation, call Georgias Turn In Poachers (TIP) line, 1-800-241-4113. Details at www.georgiawildlife.com.

Operation Something Bruin documented hundreds of wildlife violations. Todays arrests bring an immediate halt to those crimes and, we hope, will make would-be violators think twice before breaking the law. Our long-term goal is to deter illegal wildlife activities from taking place in the future and serve notice to everyone that wildlife officers are ever vigilant in the service of conservation and public safety.


We take very seriously our duty to investigate the unlawful take of wildlife, and we regularly partner with our state and federal conservation law enforcement agencies to coordinate and share assets and information to accomplish that mission in the most effective way possible. We also want to thank our fellow law enforcement agents and officers who have worked so diligently over the past four years to counter the illegal poaching of black bears, and we are hopeful that this makes a long-term impact that results in increased protection of the black bear.

"It was natural for us to participate in this operation, because we have a long history of cooperation with state wildlife agencies to protect game lands and management areas. Because we already have these existing collaborative relationships, we were able to move seamlessly into this joint undercover operation, and keep it going for the necessary timeframes. We were all able to care for the land, its resources and serve the public. This was a win-win for everyone involved
- except, of course, for the bad guys.

"We have learned that conserving black bears and other wildlife resources requires us to protect them across their range. This operation is a testament to the success that is achieved when neighboring state and federal conservation agencies come together to ensure that our wildlife heritage is conserved for future generations to enjoy."