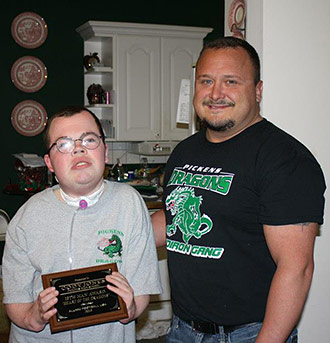 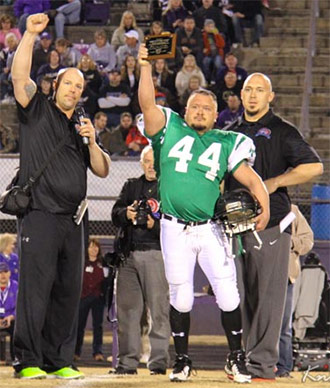 The Gilmer versus Pickens Alumni Football game was held on March 9, 2013 at the
Huff-Mosley Memorial Stadium in Ellijay, Georgia.

Prior to the game, Cody Jones was recognized by the Pickens Gridiron Dragons Alumni Football team for being the 12th Man, "Heart of the Dragons". Although Cody was unable to attend due to sickness, he received a standing ovation from the fans.

Pickens Dragons Alumni Captain, Joey Edwards visited Cody after the game to present the plaque. Cody's mother, Angie said he is very proud of the award.

Pickens defeated the Gilmer Bobcats 20-13. More alumni games are being planned for the future.

Video highlights below from the Alumni Game.

MORE NEWS ------ BACK TO KNOWPICKENS.COM