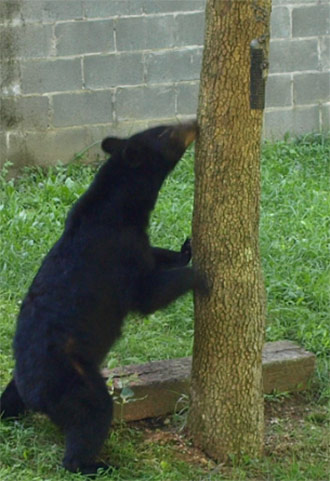 (SOCIAL CIRCLE, Ga.)  During spring and summer, it is not unusual to see young male bears venturing into suburbs and even urban areas, even in metro Atlanta, according to the Georgia Department of Natural Resources Wildlife Resources Division.

These young bears are often on their own for the first time after being forced out of traditional bear range by adult male bears. The young bears roam as they try to establish their own territory.

The sightings that result often cause unnecessary alarm. According to state bear biologist Adam Hammond of the Wildlife Resources Division, heres how best to respond:

 Leave all bears alone. Usually, they are only passing through an area.

 Stay a safe distance away.

 Never, under any circumstances, feed a bear.

Even worse, attempting to tree or corner a bear compromises both the safety and welfare of the public and the bear, Hammond said.

Unless there is evidence of aggressive behavior or habituation to people, there is no real cause for alarm, he said.

If left alone, these young male bears, referred to as transient bears, usually return to more traditional bear range  the north Georgia mountains, the Ocmulgee River drainage system in central Georgia or the Okefenokee Swamp in the southeastern part of the state. Increased bear sightings in North Georgia indicate that the bear population in this area is healthy and possibly expanding its range. Meanwhile, Georgias growth and development is increasing the population of people in and around areas where bears are more common.

The black bear is a symbol of Georgias natural diversity, the only bear found in the state and a high-priority species in the states Wildlife Action Plan, a comprehensive conservation strategy. Though now considered the most common bear in North America, the species was nearly eradicated from Georgia in the 1930s due to unregulated market hunting, poaching and large-scale habitat loss. Sound wildlife management practices have restored Georgias black bears to a thriving population estimated at 5,100 bears statewide.

While there is no way to prevent a bear from wandering into a neighborhood, there are ways to discourage it from staying:

 Never feed a bear. Keep items such as grills, pet food and bird feeders off-limits to bears. Clean and store grills when not in use. Keep pet food indoors and remove bird feeders (April-November) if bears frequent your area.

 Use bear-proof garbage containers, or store garbage in the garage or other enclosed area until the morning of pick-up day.

During a recently revealed four-year investigation called Operation Something Bruin (www.georgiawildlife.com/operationsomethingbruin), conservation rangers with Georgias Wildlife Resources Division combined efforts with North Carolina, U.S. Fish and Wildlife Service, U.S. Forest Service and the National Park Service to arrest about 80 violators on a total of approximately 980 violations. Prevent poaching by reporting any illegal activity. Information can be reported by email, phone or in person. Visit www.georgiawildlife.com/enforcement/turn-in-poachers for details.

For more information regarding black bears, visit www.georgiawildlife.com/nuisancewildlife or contact a Wildlife Resources Division game management office. The public also can visit their local library to check out a copy of an informational DVD entitled, Where Bears Belong: Black Bears in Georgia.