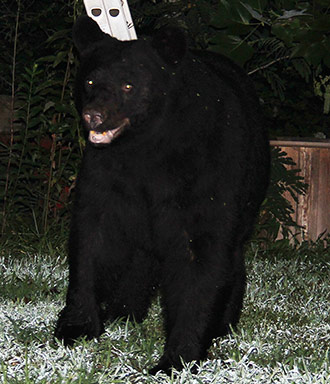 (SOCIAL CIRCLE, Ga.) )  One of the most effective things you can do to resolve human-bear conflicts is to keep non-natural food items out of sight, and smell, of hungry bears. This can become even more important when natural foods (acorns, berries, etc.) are in short supply as they appear to be this year, possibly due to heavy rains.

Easily accessible garbage is irresistible to a hungry black bear. Unfortunately, its also a major threat to its survival. Bear-proofing your garbage could add years to the lives of some of Georgias magnificent wild black bears.

Bears become habituated when people feed them  whether intentional or not, explains Adam Hammond, wildlife biologist with the Georgia Department of Natural Resources Wildlife Resources Division. When a bear learns that it can get a free meal from garbage, its going to return again and again until eventually it loses its natural fear of humans. This is how many human-bear conflicts begin, and the bear becomes labeled a nuisance.

- Convert to bear-proof garbage containers, or secure garbage inside a garage or other enclosed area.
- Place garbage cans at the curb on the day of pick-up rather than the night before. If there is no curbside pick-up in the area, take garbage to the nearest disposal site as soon as possible.
- In some cases, installing an electric fence around garbage storage areas may be useful to prevent bears from accessing household garbage.
- Remove food scraps from grills and fire pits daily.
- Rinse food cans and wrappers before disposal. Keep garbage cans clean and deodorize them periodically.
- Concerning dumpsters, install bear-proof trash bins, attach reinforcing lids or install latch mechanisms.

Garbage is just one of the many non-natural food items that attract bears. Birdseed and pet food round out the top three most common types of attractants. Homeowners in known bear areas are advised to bring pet food indoors and remove birdfeeders from April through November. At the very least, bird feeders should be taken in at night and any spillage cleaned up daily. If bears find your feeders, the bear feeders should be taken down immediately and not put out again until bears have entered their dens in late November.

In Georgia, there are three population centers for black bears. These include the North Georgia mountains, the Ocmulgee River drainage system in central Georgia and the Okefenokee Swamp in the southeastern part of the state. However, black bears can and do range over larger areas, especially in early spring and late summer when natural food sources are scarce.

The best and most effective way to resolve human-bear conflicts is to remove the attractant, Hammond says. In most cases, that simply means making trash, birdseed, pet food and other non-natural food items inaccessible.

The black bear is a symbol of Georgias natural diversity, the only bear found in the state and a high-priority species in the states Wildlife Action Plan, a comprehensive conservation strategy. Though now considered the most common bear in North America, the species was nearly eradicated from Georgia by the 1930s due to unregulated market hunting, poaching and large-scale habitat loss. Sound wildlife management practices have restored Georgias black bears to a thriving population estimated at 5,100 bears statewide.

For more information regarding black bears, visit www.georgiawildlife.com/BlackBearFacts, contact a Wildlife Resources Division game management office or call 770-918-6416. The public also can visit their local library to check out a copy of an informational DVD entitled, Where Bears Belong: Black Bears in Georgia.