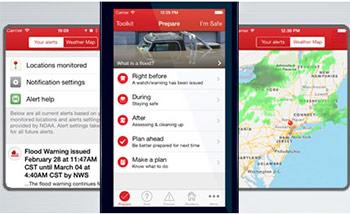 The Northeast Georgia American Red Cross is urging all residents to take advantage of the official Tornado App which puts lifesaving information right in the hands of people who live in, visit or have loved ones in tornado-prone areas. This free appavailable in English or Spanishgives iPhone, iPad and Android smart phone and tablet users instant access to local and real-time information, so they know what to do before, during and after a tornado. The app includes a high-pitched siren and tornado warning! alert that signals people when a NOAA tornado warning has been issued in their area  even if the app is closed. An all clear! alert lets users know when a tornado warning has expired or has been cancelled.

Tornadoes often happen in the overnight hours when people are sleeping, said Joni Smith, Executive Director, Northeast Georgia Chapter. The audible alerts in this app can save lives - even if users cant monitor the weather because they are away from radio, TV or in places where weather band radios may not work. It is my favorite Red Cross APP because I can keep track of weather throughout the country, where loved ones live.

Other features of the app include:
 Location-based NOAA tornado, severe thunderstorm and flood watch and warning alerts;
 Enhanced weather maps;
 One-touch Im safe messaging that allows users to broadcast reassurance to family and friends that they are out of harms way;
 Simple steps and checklists people can use to create an emergency plan and share it with household members;
 Preloaded content that gives users instant access to critical action steps, even without mobile connectivity;
 Toolkit with flashlight, strobe light and audible alarm;
 Locations of open Red Cross shelters; and
 Badges users can earn through interactive quizzes and share on social networks.

Launched during National Severe Weather Preparedness Week, the Tornado App is the latest in a series of mobile apps created by the Red Cross, the nations leader in emergency preparedness. The apps have been used to help save lives during hurricanes, earthquakes and wildfires.

The Red Cross has made great strides in putting vital information in the hands of people who need it during emergencies. In fact, our apps are now on more than two million mobile devices across the country, added Smith.

Mobile activity soared due to Superstorm Sandy:
 More than 400,000 people downloaded the Red Cross Hurricane App;
 Nearly 6 million NOAA weather alerts were sent;
 Preparedness content was the most popular feature of the app followed by alerts and the shelter locator;
 The average time spent using the app increased 300 percent; and
 The app had 15 million page views.

Right after the storm, the Hurricane App was updated with real-time recovery information including Red Cross shelter and feeding sites, FEMA sites, open gas stations and warming centers to help those affected by the storm.

The Tornado App, along with the others, can be found in the Apple App Store and the Google Play Store for Android by searching for American Red Cross or by going to redcross.org/mobileapps. Apps can help prepare people for disasters, but they are not a substitute for training. Red Cross First Aid and CPR/AED training empowers people to know how to respond to emergencies in case advanced medical help is delayed. People can visit redcross.org/takeaclass for course information and to register.

The Red Cross responds to nearly 70,000 disasters each year and we help people get ready to respond to emergencies by providing these apps for free. The Red Cross needs the help of the public to continue this lifesaving effort. People can make a donation to the Red Cross by going to redcross.org, texting REDCROSS to 90999 or by calling 1-800-REDCROSS.