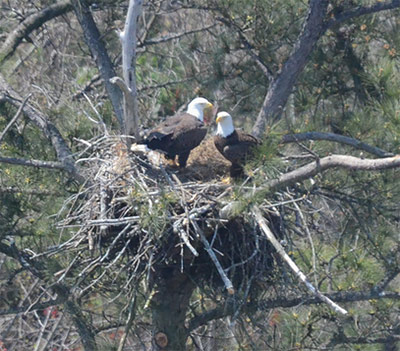 Those are the largest totals recorded for each category in decades. Some 40 years ago, this iconic raptor  symbol of the U.S.  had been nearly extirpated across much of its historic range.

Bald eagle nests numbered in the single digits in Georgia when survey leader Jim Ozier started monitoring them almost three decades ago. While nesting has steadily increased since, "We hit the grand slam this year," said Ozier, a Nongame Conservation Section program manager with the DNRs Wildlife Resources Division.

Fittingly, the rebound of bald eagles is powered in part by Georgians who support the Georgia Nongame Wildlife Conservation Fund through buying or renewing a wildlife license plate  the bald eagle or ruby-throated hummingbird designs. A share of funding from the plates benefits bald eagles and the more than 1,000 other Georgia plant and animal species listed as species of conservation concern.

And starting July 1, a law change approved this year will roll back the price of wildlife plates  including the bobwhite and trout tags  to $25. More than 75 percent of purchase and annual renewal fees will be devoted to the wildlife programs that depend on them. The fee structure applies to all DNR plates, including the flying eagle design introduced with new trout and quail plate images in 2013.

"They continue to select, and do well in, sites that I wouldnt have considered suitable just a few years ago."

The public can let Ozier know about eagle nests they see by reporting them online (here) or by phone (478-994-1438). These reports often lead to nests not monitored before. DNR works with landowners to help protect eagle nests on their property.

Bald eagles are no longer listed under the U.S. Endangered Species Act, but they are protected by federal and state law.

Eagle surveys are part of the DNR Nongame Sections mission to conserve nongame wildlife  native animals not legally hunted or fished for  and native plants and natural habitats. There are no state appropriations for this work. License plates and other fundraisers such as the Wildlife Conservation Fund income tax checkoff provide vital support.

Learn more at www.georgiawildlife.com/conservation/support. Also see how that support is put to work conserving wildlife, at Annual Report.