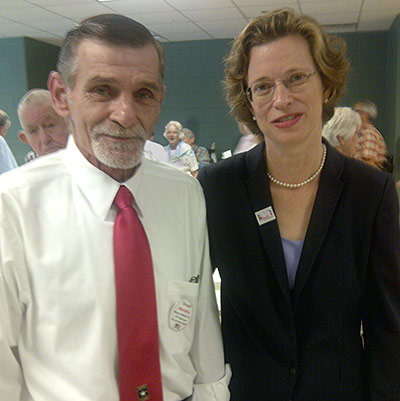 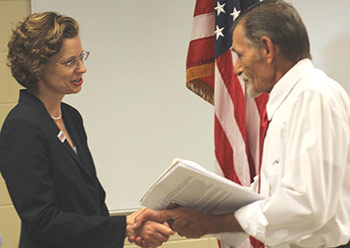 David Robinson, chair of the Pickens County Democrats made the following introduction for Michelle Nunn.

"Michelle was born in 1966 in Macon to Colleen and Sam Nunn. Her father, of course, would become a long-serving U.S. Senator. Michelle lives in Georgia with her husband, Ron, and two children, Vinson and Elizabeth.

Michelle graduated Phi Beta Kappa from the University of Virginia, then returned home to Georgia; where she and a group of friends got together to create Hands On Atlanta, a vehicle by which young people could engage in service to solve problems in their own communities. Michelle was the first Executive Director of Hands On Atlanta; and over the next decade, she grew volunteerism across Georgia, and eventually throughout the country, through Hands On Network, a national outreach of volunteer-service organizations.

In 2007, Hands On Network merged with the Points of Light Foundation. Michelle became the CEO and President of Points of Light, which is now the largest organization in the country devoted to volunteer service.

After her introduction, Michelle spoke for a few minutes on a number of issues, then took questions from the audience.

The general election will take place on November 4, 2014. If Michelle is elected, she will be Georgias first woman U.S. Senator.