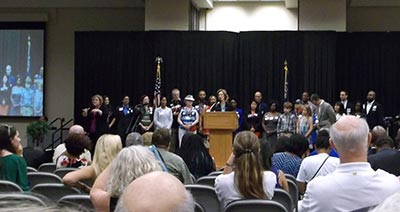 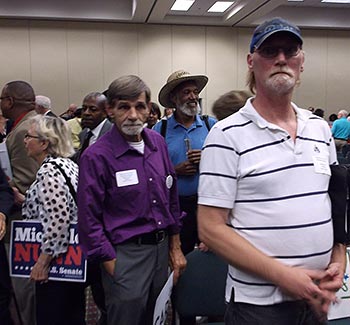 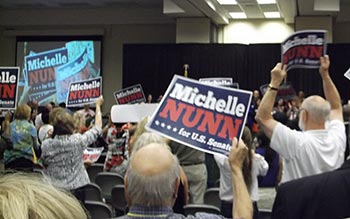 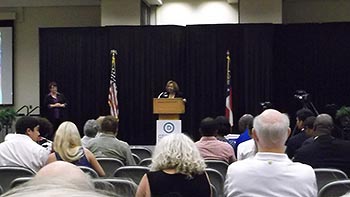 Registration began at 10:00 AM with Kicking off the convention promptly at 11:30 AM. After the opening remarks from State Party Chairman DuBose Porter, a special inspirational message was given by our President and Chief Barack Obama. Afterwards, a working lunch break was taken with various meetings and workshops to attend. Then at 2:00 PM, everyone reconvened for a portion of official business.

It was a memorable day meeting up with old friends and making new ones. The energy and excitement that filled the room as the numerous candidates took the stage was electrifying.

While all candidates on our great slate received big applause, some drew phenomenal applause. Including:

Doreen Carter, Candidate for Secretary Of State that is courageous, qualified, and committed as the woman of every Voter, Business, Professional, and Democrat.

Connie Stokes for Lt. Governor with slogan One State One Destiny One Vote at a Time, "She will Make a Difference".

The best two are saved for last!

Michelle Nunn, candidate for U.S. Senator is the daughter of Sam Nunn, former U.S. Senator. Michelle has dedicated her life to charity work and helping others. She stands for the hard working people of Georgia.

Then of course, we have Jason Carter, Candidate for the Governor of Georgia, and the Grandson of former President Jimmy Carter. Jason, as a 10th generation Georgian, has a rich deep running love of his state of Georgia. He is not only a candidate but a person for the people, and out there meeting and greeting everyone with a sincere passion for what he believes. As a parent of two small boys and the spouse of an Atlanta school teacher, he see the needs for education funding smaller class sizes and the HOPE grant. As a very down to earth person who is not afraid to roll up his sleeves and get his hands dirty, he sees the need for job training the creation of new jobs and higher minimum wage.

At approximately 4:45 PM the Convention came to a close with a reception and banquet to follow.