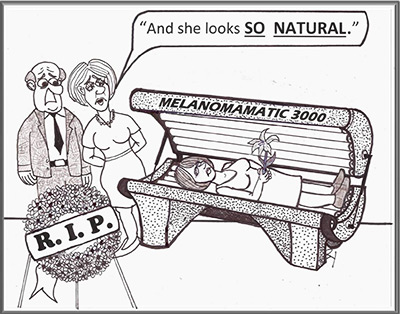 Years ago an acquaintance in her early twenties made frequent use of indoor tanning booths. She noticed a dark, reddish, irregular mole on her left side which was diagnosed as melanoma. Unfortunately, this skin cancer had already spread to her lymph system. She died two years later after it reached her brain. Might she have died of melanoma if she had not used tanning booths? Perhaps; but mounting strong evidence indicates a direct correlation between several skin cancers and frequent use of indoor tanning.

Ultraviolet (UV) radiation from the sun or indoor tanning damages DNA strands in a persons skin cells, resulting in cancers.

Now that summer is drawing to an end and many tan fans will tend to increase their use of alternative tanning methods, it is important to bear in mind that indoor tanning can be more dangerous than tanning in the sun even though tanning booths have less ultraviolet B (UVB) radiation. Tanning beds use fluorescent bulbs that emit mostly ultraviolet A (UVA) rays, with smaller doses of UVB rays. UVA radiation is up to three times more intense than the UVA rays in natural sunlight, and even the UVB radiation intensity may approach that of bright sunlight.

Despite the clear evidence that it is unsafe, the use of tanning beds is on the rise. Nearly 30 million people in the United States tan in salons every year, and most of them are women between the ages of 16 and 49.

Surveys show that many people understand the risks of tanning but continue to do it because, ironically, they think it makes them look healthy.

Meanwhile, the tanning industry makes misleading claims for the healthfulness of indoor tanning. One claim is that it helps build a base that protects against sunburn. It does, but only slightly  the equivalent of a sunscreen rated sun protection factor (SPF) 4 or less. Another claim is that tanning is a good way to stimulate the skin's production of vitamin D, a hormone that's essential to bone health and has been linked to a reduced risk for several cancers. But you can get all the vitamin D you need in certain foods or a daily vitamin D supplement, which offers all the benefits without any of the risks to your skin.

 An estimated 76,100 new cases of invasive deadly melanoma will be diagnosed in the U.S. in 2014.
 Of melanoma cases among 18-to-29-year-olds who had tanned indoors, 76 percent were attributable to tanning bed use.
 An estimated 9,710 people will die of melanoma in 2014. Melanoma accounts for less than two percent of skin cancer cases but the vast majority of skin cancer deaths.
 Since 1992, melanoma has increased 3.1 percent per year in non-Hispanic Caucasians, but in recent years it is increasing more rapidly in young white women (3.8 % since 1995) and men age 65 and older (8.8 % since 2003).
 As of September 2, 2014, ultraviolet tanning devices will be reclassified by the Food and Drug Administration (FDA) from class I (low to moderate risk) to class II (moderate to high risk) devices.
 More than 170,000 cases of non-melanoma skin cancer in the U.S. each year are associated with indoor tanning.
 Frequent tanners using new high-pressure sunlamps may receive as much as 12 times the annual UVA dose compared to the dose they receive from the same amount of sun exposure.
 Just one indoor tanning session increases users chances of developing melanoma by 20 percent, and each additional session during the same year boosts the risk almost another two percent.
 People who first use a tanning bed before age 35 increase their risk for melanoma by 75 percent.
 Treatment of non-melanoma skin cancers increased by nearly 77 percent between 1992 and 2006. Although aging of baby boomers accounts for part of this increase, much is thought to be attributable to increased indoor tanning.

The younger people are when they begin tanning and the more frequently they are exposed to ultraviolet radiation (sun or indoor tanning), the more likely it is they will develop skin cancer later on in life, if not sooner. Therefore, it is crucial to always protect children with sun blocking lotions and coverings and keep them out of the most intense sun rays (midday). Also, never permit a teenager to use indoor tanning.

Truly beautiful skin is healthy skin, and as beautiful as a tan can make a person look, tanning can significantly increase the chances of developing skin cancers. Its not worth it.

Be able to recognize precancerous skin conditions and skin cancers, especially melanoma, before these cancers can spread. Information can be found on the Centers for Disease Control and Preventions (CDC) website at www.cdc.gov/niosh/topics/uvradiation.

See a physician without delay about any skin condition that could be cancerous.