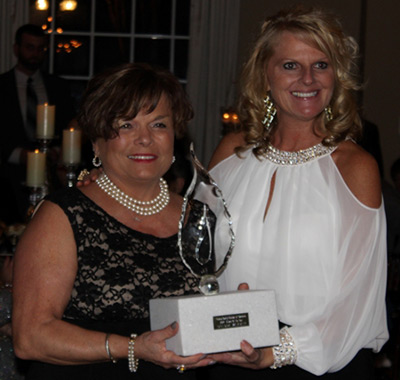 VIDEO OF THE ANNOUNCEMENT

The Pickens County Chamber of Commerce named Mrs. Brenda Weaver the 2015 Pickens County Citizen of the Year on Saturday, January 17 at the Tate House during its Annual Winter Ball. Mrs. Weaver, also known as the Honorable Judge Weaver, will be filling the shoes of Mr. Jeff Downing who was chosen for the same honor in 2014. Mr. Downing carried out his duty with honor making multiple public appearances throughout the year as the Citizen of the Year and was recently named the 2015 USA International Retailer of the Year!

Mrs. Weaver, who was in attendance at the Winter Ball and hosted a table representing the Appalachian Judicial Circuit. Mrs. Weavers husband George and daughter, Jenny, were also in attendance. Mrs. Weaver was surprised when she was joined by family members and close friends wanting to celebrate the distinguished honor. Among these family members were her daughters, son, son-in-laws, granddaughters and grandsons.

Mrs. Weaver was at a loss for words when she came to the podium to accept her award and express her appreciation to a packed house of family, community and business leaders.

Brenda Weaver has served on many local organizations, many of them from their start; and is currently active on over 10 Boards and/or Advisory Committees. To name a few, Appalachian Children Center, Good Samaritan Health and Wellness Center, Hope House, Appalachian Childrens Emergency Shelter, Joy House, Georgia Mountain Hospice, Kids Kottage, Rotary Club of Jasper, Jasper Lions Club, Optimist Club, CLCP and the list goes on and on. All the while, serving as Chief Superior Court Judge of the Appalachian Judicial Circuit and the Presiding Judge in the Appalachian Judicial Adult Drug Court and Veterans Court.

Brenda Weaver does not stop at the local level, Brenda or Judge Weavers Appalachian Judicial Circuit Family Law Information Center, which provides assistance to low incomes individuals serves as a model to other rural judicial circuits in Georgia. She serves as President-Elect of Superior Court Judges becoming President in May, 2015, Chairperson of Judicial Councils Accountability Courts Committee, member of the Uniform Rules Committee and the Pattern Charge Committee of the Council for Superior Court Judges. She was appointed by the Supreme Court to serve as a member of the Superior Court Clerks Cooperative Authority Board of Directors, the Judicial Qualifications Commission and the Accountability Courts Funding Committee. Just recently she agreed to serve as a member of the Georgia Supportive Housing Board of Directors.

Weaver joins an elite group of local citizens who have a portrait painted in their honor. Pisconeri Studio in Jasper will provide the portrait of Mrs. Weaver which will be officially unveiled at an upcoming Chamber breakfast. The portrait will then be on display at the Chamber of Commerce building. The Chamber would like to thank ETC Communications for their sponsorship of the Citizen of the Year process.