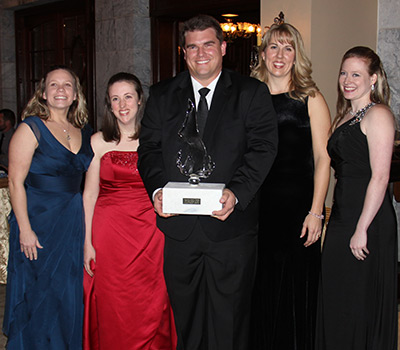 VIDEO OF THE ANNOUNCEMENT

At the event known as the Winter Ball, the Pickens County Chamber of Commerce Annual Gala, the 2015 Small Business of the Month program culminated with the announcement of the 2015 Small Business of the Year. The 2015 recipient, Wayside Animal Hospital, was commemorated with the presentation of an impressive blown glass flame mounted on a native marble base. Dr. Thomas Lyn Lewis, joined by his wife, Kristen, as well as a full table of Wayside Animal Hospital staff and family, were thrilled to have been chosen for this award.

Wayside Animal Hospital was formed in 1978. Dr. Lewis and his wife Kristen purchased the business in August of 2009 with (6) six employees. When Wayside Animal Hospital was named Small Business of the Month, making them eligible for the Small Business of the year, staff had doubled in size to (12) twelve employees. Dr. Lewis has expanded the business by 80% since his purchase in 2009.

Dr. Lewis is no stranger to growth in business as he was the previous owner of Appalachian Animal Hospital and won the 100 Fastest Growing Bulldog Businesses twice, standing alongside CEO's from businesses like AFLAC and Build a Bear Workshop. This was the first year that Wayside was eligible and they finished just outside of the top 100.

Dr. Lewis has been an active member of the Pickens County Chamber of Commerce since February 15, 2011 attending the monthly breakfast meetings, After Hour events and participating in yearly events such as the Auto Give Away. Practice Manager, Lori Edmondson is a 2013 Leadership Pickens Graduate and Bobbie Jo Cash is in Leadership Pickens, Class of 2015.

Wayside Animal Hospital works to stay active in the community with its primary focus on children. The business actively participates in the high school Youth Apprenticeship Program (YAP) and have had the program scholarship winner for the last 2 years. They participate in Career Day at Pickens High School, offer programs where animals are taken to school classrooms to explain different aspects of pet ownership and dealing with local wildlife tailoring the talk to kids as young as pre-school all the way to the high school level.

Support is given on a regular basis to numerous non-profit organizations, both financial as well as service. Currently Wayside Animal Hospital donates approximately 20 hours each month with the local shelter and other rescue groups. Many of their employees are active in Breast Cancer Awareness and raise money to help them walk in the Susan G. Komen 60 mile Breast Cancer Walk.

Please join us in congratulating Dr. Thomas "Lyn" Lewis and all the staff of Wayside Animal Hospital on this great honor! We are proud to have them as a member of our Chamber and the Pickens County Community.