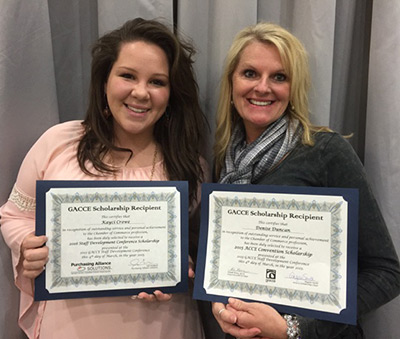 Scholarships are awarded on a competitive basis based on:

This year the association received 62 applications. The GACCE Board of Directors was able to award the following scholarships:

GACCE was able to award eight additional scholarships than it normally would because of the generous donations of three long-time Associate Members and sponsors of the association.

Jeff Fishback with Purchasing Alliance Solutions awarded Kayci Crowe, Membership & Operations Specialist of the Pickens County Chamber of Comerce with one of their six scholarships to the 2016 GACCE Staff Development Conference.

Angela Smith, Director Chamber Development with the Americus-Sumter County Chamber and Vice Chair of Professional Development for GACCE, announced Denise M. Duncan, President of the Pickens County Chamber of Commerce as the recipient of one of two recipients to the 2015 ACCE Convention in Montreal, Canada.

GACCE congratulates all of our scholarship winners!