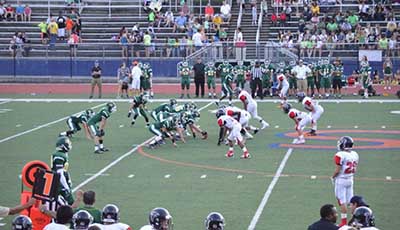 The Falcons opened the season with a hard fought victory over Holy Spirit Academy.

FB David Richards scored from 31 yards on a run up the middle to give North Georgia a 6-0 lead in the first quarter. Holy Spirit came right back but settled for a 25 yard field goal to make it 6-3.

Holy Spirit scored on a touchdown pass to make it 10-6, but the Falcons responded with a 20 yard touchdown run by Scott Richards. 12-10 Falcons.

Before the half, QB Gadi Gonzalez threw a 28 yard TD pass to Junior Lazalde to put the Falcons up 18-10.

Early in the 4th quarter, Scott Richards scored again this time from 11 yards to give the Falcons a 24-13 lead.

With time down to under 2 minutes in the game, Holy Spirit was able to score to make it 24-19, but was unable to score again as time ran out.