FALL HAS ARRIVED-TIME TO FATTEN UP FOR THE WINTER? 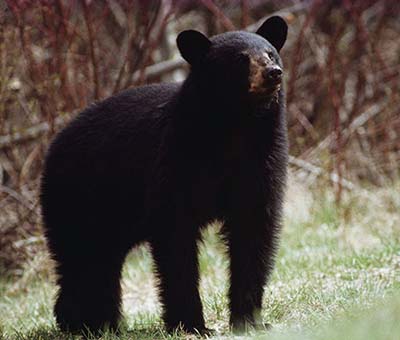 At this time of year, bears are preparing to den up for the winter, and in order to do so, are seeking large quantities of high-fat food to get them through the long, cold months.

Bears are going through a stage called hyperphagia where they are loading up on food to prepare for the winter, said Adam Hammond, state bear biologist for the Wildlife Resources Division. This activity has recently intensified, especially in north Georgia, as the mast crop - or the natural foods that bears eat, such as berries, fruits, acorns, etc. - was a little lighter this year and bears are working harder to find adequate amounts of food. This may result in bears turning to alternate non-natural food sources to supplement their food supply.

What can you do to help? Landowners, homeowners and business owners in areas where bears have been sighted can help reduce human-bear issues by taking these important steps:

- Convert to bear-proof garbage containers, or secure garbage inside a garage or other enclosed area.
- Place garbage cans at the curb on the day of pick-up rather than the night before. If there is no curbside pick-up in the area, take garbage to the nearest disposal site as soon as possible.
- In some cases, installing an electric fence around garbage storage areas may be useful to prevent bears from accessing household garbage.
- Remove food scraps from grills and fire pits daily.
- Rinse food cans and wrappers before disposal. Keep garbage cans clean and periodically deodorize them.
- Concerning dumpsters, install bear-proof trash bins, attach reinforcing lids or install latch mechanisms.
- If you have small livestock or other animals on your property, installation of electric fencing may help deter bears from harassing animals or eating the food intended for livestock.
- Put away bird feeders and if feeding pets outdoors, ensure that bowls are removed when pet is done eating.

Homeowners, residents, visitors and those who value Georgia wildlife can help keep bears wild by removing all potential sources of food. Whether intentional or not, the result is the same as once bears find food, it is an open invitation to return again and again, said Hammond. Annually, most bear activity winds down in the fall as acorns become available, however, when acorns are scarce, bears tend to be on the move later in the year.

Georgia boasts a healthy statewide bear population, with the highest density of bears located in the north Georgia mountains.

The black bear is the only bear found in the state. Though now considered the most common bear in North America, the species was nearly eradicated from Georgia by the 1930s due to large-scale habitat loss, poaching and unregulated market hunting. Sound wildlife management practices have restored Georgias black bears to a sustainable level.

For information regarding black bears, visit www.georgiawildlife.com/BlackBearFacts or contact a Wildlife Resources Division Game Management office. The public also can visit their local library to check out a copy of an informational DVD entitled, Where Bears Belong: Black Bears in Georgia.