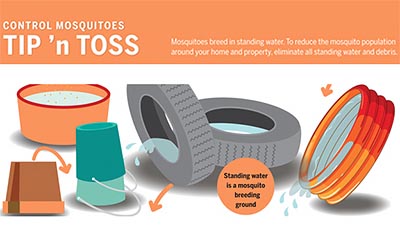 The North Georgia Health District of the Georgia Department of Public Health is joining the statewide public health campaign in urging residents to clean up around their homes, their yards and their communities and discard unnecessary items that can hold water. Tip n Toss after every rainfall to reduce the number of mosquitoes and prevent the spread of Zika virus in North Georgia.

Zika virus is transmitted primarily through the bite of infected Aedes aegypti and Aedes albopictus mosquitoes  both species are found in Georgia. Aedes mosquitoes typically bite during the day, especially in the early morning and late afternoon hours but some bite at night. They are called container breeders because they lay eggs in any type of container with water  even something as small as a bottle cap if it has water in it.

One of the most effective ways of preventing the spread of Zika virus is controlling the mosquito population by eliminating standing water around the home and in the yard.

Tip n Toss! After every rainfall, Tip out water in flowerpots, planters, childrens toys and wading pools, and buckets. If it holds water and you dont need it (old tires, bottles,cans), Toss it out. Look for small bodies of water such as drainage ponds, tree stumps and tire ruts. Clean out gutters, remove piles of leaves and keep vegetation cut low to prevent landing sites for adult mosquitoes.

For containers without lids or that are too big to Tip N Toss (bird baths, garden pools), use larvicides such as mosquito dunks or mosquito torpedoes and follow the label instructions. Larvicides will not hurt birds or animals.

Homeowners associations and neighborhoods, along with city and county governments, are encouraged to sponsor community cleanup days.

Mosquitoes do not recognize property lines, so controlling their numbers has to be a collaborative effort among neighbors. Public health is increasing mosquito surveillance and educating residents, but the greatest impact will be when individuals take personal responsibility for their homes, yards and communities.

To learn more about Zika protection and prevention or Tip 'n Toss, log on to dph.ga.gov/zika or cdc.gov/zika.