Nashvilles Bluebird Café comes to Jasper
Roccos Pub will host a collection of Nashvilles hottest songwriters on August 18 at 7:30 pm 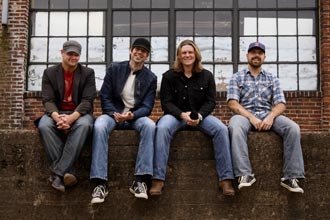 The songwriter night is sponsored by Jasper resident and music businessman, Jeff Catton. Catton, President and CEO of InTune Entertainment in Nashville, hosts an annual song writers retreat at his mountain home each year. This year the retreat concludes with a live performance at Roccos. I thought the writers would have fun ending the week performing some of their new material as well as other songs, said Catton. Well have writers who have written songs for Jason Aldean, Josh Thompson, new act Thompson Square and many others as well as writers whove performed with Blake Shelton, Dirks Bentley, Sara Evans, Eric Church and Little Big Town. The acoustic performance at Roccos will be just like performances at the Blue Bird Café with each writer taking turns sharing songs. The Adam Craig Band will accompany them, said Catton.

Cattons InTune Entertainment manages several of the writers including Adam Craig and his band, and Chris Weaver. Adam has had a phenomenal year, said Catton. Hes had huge success with the song Church Pew or Bar Stool recorded by country superstar, Jason Aldean.

Aldean recorded the song on his current CD, My Kinda Party which has sold over 1,500,000 copies so far and is the number one selling country act this year. Craig already has another song to be recorded by Aldean on his next CD scheduled for release next year as well as one on the upcoming Josh Thompson CD. Writer Chris Weaver has the song Want It licensed by college football teams. LSU and Oklahoma have licensed the song for their teams this year and were currently talking with the NFL about using the song as well. Well also have writer Rick Monroe performing, said Catton. Rick hosted the Dirks Bentley  Josh Thompson Jagermeister tour this past year.

Roccos is located at 47 Mountainside Village Parkway in Jasper just off highway 515 and call ahead seating is available at 706-253-1900. There is a $5.00 cover charge for the performance on Thursday, August 18.