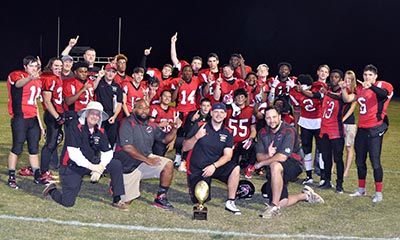 The Falcons beat the East Atlanta Mustangs 18-0 to become the 2016 GFC Football League State Champions. The Falcons scored to make it 6-0 in the first quarter on a short run by Trey Baker. In the second quarter, Josiah France scored on a short run to make the score 12-0. In the 3rd quarter, linebacker George Mitchell picked up a fumble and took it to the house, giving the Falcons the margin of victory 18-0.

We are very proud of this 2016 NG Falcon Football team!