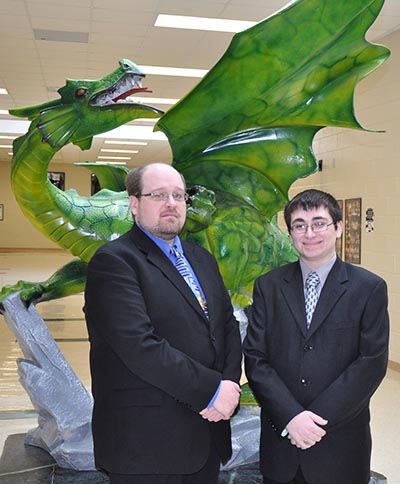 Jonathan Friedman has been named the 2017 STAR Student of Pickens High School. The announcement is made by the Optimist Club of Jasper, local sponsor for the Pickens STAR Program. Friedman is the son of Aury and Patti Friedman of Talking Rock. He has selected Mr. Wil Nix as his STAR Teacher.

The PAGE Student Teacher Achievement Recognition (STAR) program, is administered and promoted by the Professional Association of Georgia Educators (PAGE). Since its inception in 1958 the STAR program has honored nearly 26,000 students and the teachers selected as the most influential to their academic achievement. To obtain the STAR nomination, high school seniors must have the highest score on a single test date on the three-part SAT and be in the top ten percent or top ten students of their class based on grade point average.

Mr. Friedman plans to attend Northwestern University in Chicago after graduation from PHS in May. He plans to study Engineering. Jonathan states that he selected Mr. Nix as his STAR Teacher Because he has been the teacher who helped me the most, both through my time at PHS and once I moved to the Advanced Academy. He has been there for me through that whole time and I feel that I owe much of my position to him.

Jonathan is currently dual enrolled and is attending The Advanced Academy of Georgia in Carrollton. He has been a member of the Boy Scouts of America since 2004 and obtained Eagle Scout in 2015. He has participated in several academic competitions including serving as the Math Team Leader at the Berry College Competition from 2010 -2012. He was a member of the Academic Team from 2013  2015.

Mr. Friedman has a First-Degree Black Belt in Martial Arts. He was a Governors Honor Program Nominee in 2015 and a National Merit Commended Scholar. At PHS he is a member of the PHS Beta Club and was a member of the Travel Club from 2013 to 2015. He is currently on the Advanced Academy Senior Committee and the Advanced Academy Yearbook Committee.