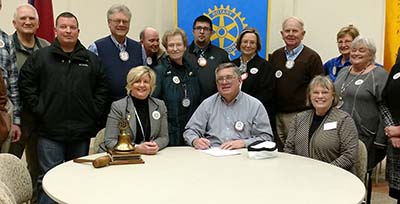 Whereas The Ferst Foundation for Childhood Literacy was chartered by the State of Georgia in 1999 as the result of Georgia Citizen, Robin Ferst, and

Whereas the mission of The Ferst Foundation is to offer, free, to all pre-school children in Georgia age-appropriate books from the Read to Me library each month along with a newsletter, childs activity sheet and parents reading guide; and

Whereas the Rotary Club of Jasper, Georgia, in 2009 accepted the challenge to organize the Ferst program for over 1650 pre-school children in Pickens County and mailed the first two books in May 2009; and

Whereas the evaluation of the Pickens Ferst Foundation for Childhood Literacy has shown that the children in Pickens County kindergarten who received Ferst books were more ready to learn compared to the rest of the classroom as a whole; and

Whereas research has continually shown that when adults read aloud to children from birth, it promotes increased language development and a better understanding of language which leads to literacy success; and

Whereas the tireless work of Pickens Ferst Foundation Community Action Team (CAT) volunteers with the strong support of the Pickens County community have created a successful program which has mailed out over 85,000 free books since 2009 to Pickens County children under the age of 5 ; and

Whereas the 2017 goal of The Pickens Ferst Foundation is to continue mailing out approximately 1000 books each month and mail out their 100,000th book at no cost to the parent but an actual cost of approximately $35,000 a year; and

Be it therefore resolved that March 20 through 27, 2017 is proclaimed as PICKENS FERST WEEK throughout the County of Pickens, State of Georgia, and USA.