Pickens Ferst Most Wanted To Be Arrested
Arraignment at the Old Historic Jail on North Main Street on Tuesday, April 25, 2017 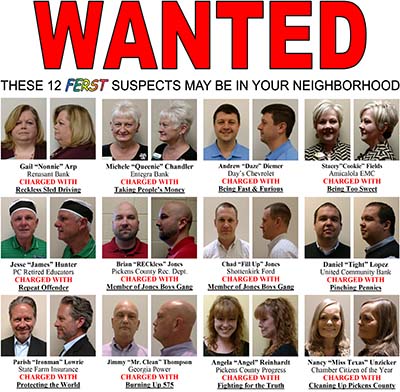 Pickens Ferst Foundation for Childhood Literacy is on the lookout for our Twelve Most Wanted suspects to be "arrested" and brought to the Old Historic Jail on North Main Street on Tuesday, April 25, 2017. Local law enforcement will be picking them up starting at 11:00 AM and bringing them before the "judge" on the Jail house steps. There they will hear the charges against them and have their bail set.

These community-minded citizens will then be lead into jail until their bail is paid. They will be free to go after having served their time for a great cause. All bail monies will be donated to Pickens Ferst Foundation for Childhood Literacy and will be used locally to fund the program that provides free age-appropriate books with literacy support materials to over 1000 Pickens County children under the age of 5 each month.

The public is invited to attend this fun fundraising event and perhaps even help one or more of the detainees get out of jail.

Would you like to help? Go to www.ferstfoundation.org and click on the Donate Now link. Under Community/County, pick Pickens County. Under Special Occasion, list Jail n Bail and "in honor of" note which detainee that you are supporting. Or you can mail a check to Pickens FERST, PO Box 2062, Jasper, GA 30143 and make the check out to Pickens FERST and note in memo line: name of detainee.

All money raised during this fundraiser stays in Pickens County to fund our local program. Pickens Ferst Foundation for Childhood Literacy is a 501(c)3 and your donations are tax deductible. Ferst Foundation is a 4-star charity at www.charitynavigator.com.