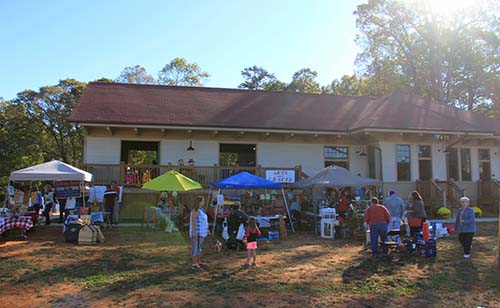 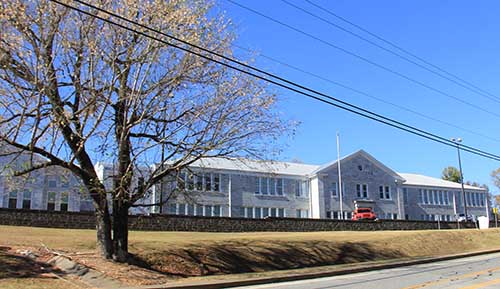 The restored old Tate Depot will serve as a historic and picturesque location for arts and crafts vendors on Saturday, November 4 --Tate Day, 2017. The building itself will attract visitors to the vicinity.

Marble Valley Friends member Penny Prince Davis will again coordinate the vendor segment of the Day's activities. Mrs. Davis is anxious to hear from anyone having quality merchandise to offer. Her telephone number is 770-735-2564. Prospective vendors should call soon for a choice location.

Marble Valley Friends, a historic preservation organization sponsors the Tate Day Festival; however, other organizations participate by sponsoring their own events on Tate Day.

This year Tate Elementary School's PTO will get the day started with a well-planned 5k race. The PTO is publicizing the event.

Once again, Tate United Methodist Church is hosting a yard sale and a hot dog lunch. Funds raised are used in support of the Weekend Snack Program for local students--a most worthwhile effort.

The Amicalola Garden Club will operate a booth featuring baked goods, miscellaneous hand-made items, and raffle tickets for a birdhouse replica of the Tate United Methodist Church. According to the Club's President Mary Jane Griffeth, raffle tickets will be available at both the old depot and at the Old Tate Gym during the day. Funding from these endeavors assist the Club in its original 1934 goal, "To be an active force in the community".

Involvement of these "other" groups demonstrate the cohesiveness of organizations seeking to promote Tate's history and future.

Another "do it yourself" feature of Tate Day is the opportunity for drive-by viewing of several sites listed on the National Register of Historic Places. Within a radius of only a few miles, one can see the Polycor Georgia Marble Company, Tate Elementary School (the nation's only marble school building; it was constructed in the 1920s), the Old Tate Gym built in 1925, the Pink Marble Mansion (Tate House) and the historic Tate Village.

Many of the houses in the village are Sears and Roebuck pre-fabricated models. They were shipped to Tate by railroad and assembled by carpenters employed by the Georgia Marble Company for Company employees. Marble Valley Friends hopes to identify those buildings with more than word-of-mouth evidence. This short take-a-look trip is worth a portion of a day spent in Tate.

The annual Tate Day Festival allows Pickens County and its guests to remember the area's past, to happily embrace its present, and to dream/speculate on its future. Marble Valley Friends hope to see you on November 4th.