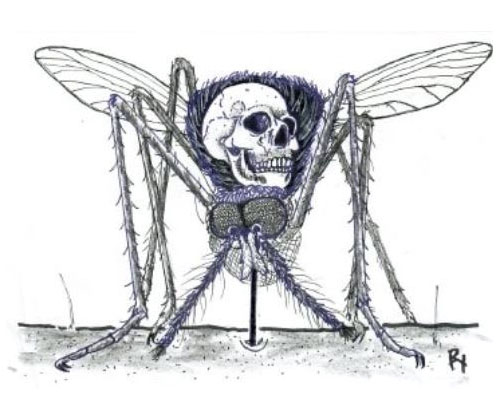 There were once two elderly gentlemen in Dalton who enjoyed sitting outside in the shade during warm weather. Both of their properties were well-kept, but neighbors properties were not, with multiple objects and containers that held water and mosquito larvae strewn about, including old tires, boats, trash, aluminum cans, cups, flower pots and old appliances.

Although their deaths were separated by more than ten years, both men died of West Nile Virus transmitted by mosquitoes.

Last year, two teens in a nearby county became gravely ill and were hospitalized with La Crosse virus, another kind of encephalitis transmitted by mosquitoes.

Parents and caretakers should understand that children, the elderly and those with compromised immune systems are the groups most likely to get these mosquito-carried diseases.

Mosquito-carried illnesses are on the increase in the United States and disease cases have doubled between 2004 and 2018, according to a report released by the Centers for Disease Control and Prevention.1 Further, the report found that disease cases from infected mosquitoes, ticks and fleas have tripled in 13 years and nine vector-borne diseases were discovered or introduced for the first time from the United States and its territories. Georgia falls roughly in the middle of the states for ailments spread by bugs.

"Zika, West Nile and chikungunyaa growing list of diseases caused by the bite of an infected mosquito, have confronted the U.S. in recent years, making a lot of people sick. And we don't know what will threaten Americans next," CDC Director Robert R. Redfield said in a news release. "Our nation's first lines of defense are state and local health departments and vector control organizations, and we must continue to enhance our investment in their ability to fight against these diseases."2

Repellants containing DEET are the most effective, but there are alternatives such as picaridin, IR3535, oil of lemon eucalyptus (OLE), oil of para-menthane-diol (PMD), or 2-undecanone. However, these alternatives are somewhat less effective and do not last as long. If using these alternatives to DEET on children, you must repeat applications more often. And there is always the alternative of staying indoors during dusk, night and dawn when most female mosquitoes are out looking for blood. But remember, some mosquito species bite during the day, including the most common species, the Asian tiger mosquito. These repellants also protect you from ticks, another carrier of diseases for humans. Use repellants on your children when they are outdoors and check them thoroughly for ticks when they come home.

Controlling mosquitoes by destroying their larvae and breeding places is a hundred times more efficient than killing adult mosquitoes. Killing adult mosquitoes is difficult but necessary where larvae control is limited or not possible. Pest control companies can apply barrier sprays to outside areas of your home and may also offer mosquito traps. The use of Ultra Low Volume sprayers at night by government programs is not very effective against the Yellow Fever Mosquito or Asian tiger mosquito because these species are mainly daytime biters.

Objects or areas that cannot be emptied of water should be treated with Mosquito Dunks® which contain bacteria fatal to mosquito larvae but absolutely harmless to everything else. Mosquito Dunks® are safe for bird baths and even your pets water bowl. You can break up these donut-shaped dunks by hand and use smaller pieces for small areas. Mosquito Dunks® kill larvae for at least a month unless they are washed away. They are made in the shape of a donut, so you can tie it to a rock with string. Placed this way in ditches and water holes, they will not wash away with the next rain. They must be replaced every thirty days or so. Bacteria in dunks will not hurt pets, children, birds or wildlife.

If you have a large area of permanent stagnant water consider introducing small fish such as the native Mosquito Fish, Gambusia affinis. You can order mosquito fish online at www.kens-fishfarm.com. Small bream and other native fish will work as well if there is enough oxygen in the water. There are a number of products to treat stagnant water areas ranging from biological controls like mosquito fish, growth regulators (methoprene contained in Altosid), to potentially hazardous pesticides. Of course, Mosquito Dunks® work as well but require more of them, about one for every 100 square feet of water.

Call a mosquito control professional or your environmental health office if you are not sure what to do. Don't treat stagnant pools with an inappropriate or too much insecticide. Always follow the label directions! If the pesticide is not labeled for killing mosquito larvae, dont use it. Using a pesticide for a purpose other than for which it is labeled or in greater concentrations than required is a violation of state and federal regulations. You may poison yourself, the environment, your family and your pets. Always use protective gloves when handling pesticides and use other precautions as recommended.

You want to keep adult mosquitoes out of your home. Doors to the outside should not be left open during mosquito season unless protected by tight-fitting screen doors. If you have shaded areas around your doors, these are great areas for adult mosquitoes to hang out during the day and enter your home as you open and close the doors. These shaded areas around doors should be treated with a residual insecticide at least once a month. You may buy these at hardware stores in ready-to-use sprayers or mix your own from insecticide concentrates and apply with a simple pump sprayer. Use safety precautions and follow label directions.

On a small scale around your home, you have several choices for killing mosquito larvae, the most basic of which is emptying all containers and draining stagnant puddles. Of course, your neighbors must do the same and that is sometimes a difficult problem. You may apply a little mineral oil or even cooking oil to small containers which will suffocate mosquito larvae. Mosquitoes love to breed in the pans under flower pots, so dont over water or at least keep them treated with dunks.

There are devices you can purchase which lure female mosquitoes into a trap, devices made especially for female container mosquitoes, Aedes aegypti and Aedes albopictus. Two of these products are Mosquito Trap-N-Kill© and Ovitrap©. If not available at your local stores, they may be ordered online.

And lastly, remember that mosquitoes also carry heartworms and other diseases to your pets. When you rid your property of mosquito breeding habitats you protect them as well.