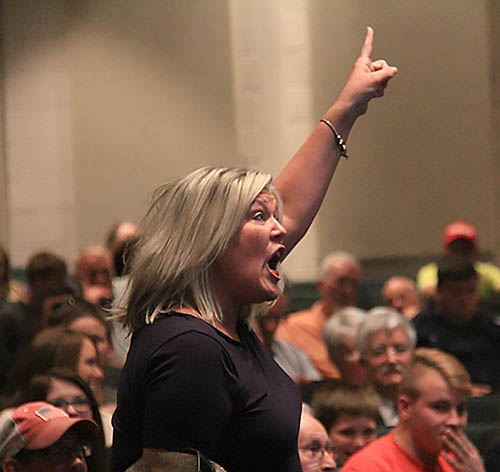 PRESS RELEASE from Pickens County Schools 10/17/19:
There have been many serious safety concerns raised in the past few days. School board members, staff, and students have been threatened due to the administrations implementation of Adams vs. St. Johns County School District. There have been death threats, student harassment, and vandalism of school property. The District understands and acknowledges that it has the responsibility to protect its staff and students. However, the District has concerns that it may not be able to meet these recently increased demands.

Therefore, the District shall return to bathroom procedures in place at the beginning of the 2019-2020 school year until it can consult with law enforcement and other safety professionals so that these concerns may be addressed.

We ask that all of our stakeholders exercise patience and discretion until these matters can be resolved.

Additional message from Superintendent Wilson: "This is not a Pickens County issue. It is not a north Georgia issue or a southern issue. This is a national issue and it is ripping apart the very fabric of public education making it virtually impossible for schools to do what they are supposed to do  educating our children.

We are calling for strong leadership at the state level, as well as the national level, as schools and communitiescontinue to grapple with issues like fighting expensive lawsuits and diverting valuable resources from what should be our only focus  educating our children."

Following a recent press release from the Pickens County Board of Education, we have received several inquiries into reports of threats and safety within the schools. Our office has been actively involved in a couple of incidents listed below.

On Thursday, October 10th, we had a student make statements on social media. One statement made encouraged other students to lash out in violence against other students within the school. The second statement was generic but referred to individuals that signed a petition making good target practice. Within an hour of the post, deputies were with the student and parents at the students home. Following the investigation, the student was charged as a juvenile with Disorderly Conduct.

During the following days, we had two incidents reported to our office where graffiti was found in bathrooms at Pickens High School that were threatening toward others. These were both investigated

Within the High School, 2 separate students have reported bullying issues to School Resource Officers (SRO). These issues were investigated by administrators and deputies. Appropriate disciplinary action has been taken.

We have recently been made aware of threatening calls and social media posts being made to school administrators, and at least one board member. We have assigned a detective to this case to determine the nature of the threats made and identify where they originated.

We will continue to investigate any additional cases as they arise and remain diligent in our efforts to protect all students within the Pickens County School System.

NOTE: Pickens County Schools Superintendent, Dr. Carlton Wilson ended the Town Hall meeting during the discussion of the noted items from public comments saying, "This is totally going out of control." He stated that he would take every bit of the concerns under consideration for the next few days, as well as suspend all policies. A press release will be sent out answering all questions.

Video from Town Hall is unedited but some footage lost due to battery change at 2:43:37


PRESS RELEASE ON TOWN MEETING BELOW

Several parents have expressed concerns that this administrative permission will jeopardize the safety of the High School students. Safety of all students has been and will continue to be the Districts number one concern. The High School staff monitors all restrooms during class changes; we are asking the staff to be even more diligent in their duties to ensure that these safety concerns do not materialize. We have state law and board policies that prohibit bullying and harassment of all students; these apply and are enforced regardless of whether or not a student is transgender. This was our practice before the community became aware of the transgender issue, and this will continue to be our practice now that this issue has come to the forefront.

Although I have met with our architect to develop a redesign of our restroom facilities, and we anticipate these changes to be implemented expeditiously, we still maintain single-stall restrooms in the High School that are available to any student who wants to use gender neutral restrooms, regardless of the reason.

There are several United States Supreme Court cases that may be heard this term, and the District will monitor these cases and modify our practices accordingly. We have taken an oath to uphold the law, and we will.

VIDEO below is Pickens County Schools Superintendent statement regarding transgender restrooms during the Board of Education meeting on October 10, 2019.