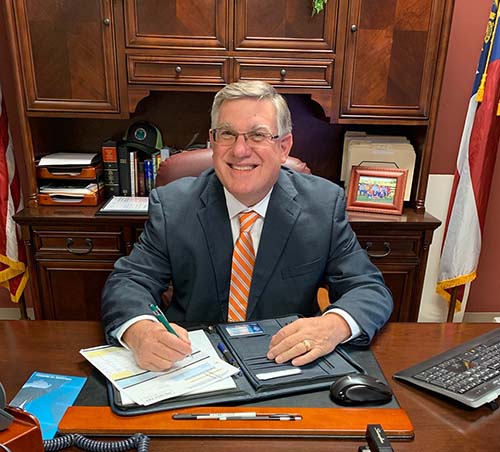 Pickens County Commission Chairman Rob Jones formally announced today that he is seeking another term in 2020. Jones was first elected as the Sole Commissioner in 2004, and held that title until 2012, when voters formed a Board of Commissioners. Jones was elected Chairman of the Board in 2012 and has been proud to serve the community in that role.

Jones accomplishments during his tenure include, but are not limited to, these capital projects: 1) building of the County Jail; 2) acquisition and renovation of the County Administration Building; 3) building the County Courthouse; 4) and the addition of the Community Center to serve as the hub for parks and recreation.

These projects cost $30,201,264, but have been completely paid off, leaving Pickens County essentially debt free. Jones accomplished this without a raise in the millage rate for property tax owners. I believe being fiscally responsible is one of the most important jobs I have, said Jones. When it comes to managing a budget like that of the county, experience matters.

As Chairman of the Board, Jones leads the day-to-day operations of county government under the current county charter. As Chairman, Jones works with the Board of Commissioners and appointed department heads to ensure operational efficiency and fiscal responsibility to the more than 30,000 residents of Pickens County. Currently, Pickens County employs over 400 people and has a budget of more than $26,000,000.

Being at the helm is a job that Jones takes seriously. I realize Im dealing with your money and I have to look out for every corner of the county, said Jones. Being Chairman is not about running a department; its about the ability to support good decisions and relationships with all of the elected officials and department heads to make sure we are meeting the needs of the citizens of Pickens County.

The Jones administrations successes also include the addition of full-time fire rescue services to the county and the support of public safety programs. Adding full-time firefighters and opening three new stations (along with one currently under construction) bolstered the infrastructure and responsiveness for our citizens.. Planning and action today make us better able to manage the resources necessary for growth tomorrow. While we cant stay the same Pickens County, we were 10 years ago, we can retain our small-town feel, while being open to growth opportunities. We need to be ready for the future with experienced leaders who can manage smart growth, said Jones.

Under Jones leadership, Pickens County made great strides in both transport and water infrastructure. Resurfacing roadways and improvements to bridges and railroad crossings have been a major priority. The county extended water lines to all its bordering neighbors. A partnership agreement was reached with Grandview Lake Company to establish the countys first reservoir and water treatment facility. These infrastructure investments will have lasting impacts on our community. It allows us to increase our capabilities for any potential growth opportunities and ensure we can provide adequate services to all citizens, said Jones.

Diane and I are humbled by the support that weve received so far, said Chairman Jones as he discussed his 2020 run. This is a different Pickens County than when I first took office. Weve accomplished a great deal, but there is even more to be done. I look forward to the challenges and successes we will face together in building a better future for everyone here in Pickens County. Jones will appear as a Republican candidate on the May 19, 2020 primary ballot.