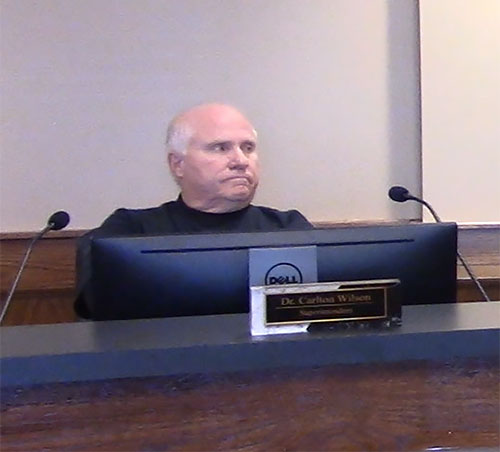 Pickens County Schools Superintendent, Dr. Carlton Wilson resigned after a settlement agreement was reached at a called board meeting on December 19, 2019. The board voted 3 in favor (Joeta Youngblood, Donna Enis, and Tucker Green) and 2 against (Sue Finley and Steve Smith) the resignation.

The resignation is effective immediately. Assistant Superintendent Tony Young will oversee duties until an interim superintendent is hired. A called meeting on Friday, December 20th at 11 am will start the process.

Jasper, Georgia  Dr. Carlton Wilson resigned as Superintendent of Schools at the emergency called board meeting held earlier this morning. His resignation was effective immediately. The Board will immediately begin the process to launch a search for a new Superintendent. The Board of Education will strive to find the best candidate to meet the needs of the district and guide it in the direction it needs to go. Mr. Tony Young, Assistant Superintendent, will manage the day-to-day operations of the system until an interim Superintendent can be appointed. Pickens County Schools Interim Superintendent Named ]

Posted by KnowPickens.com on Thursday, December 19, 2019

Below is announcement of the Emergency Called Meeting sent out an hour before the meeting was to begin: