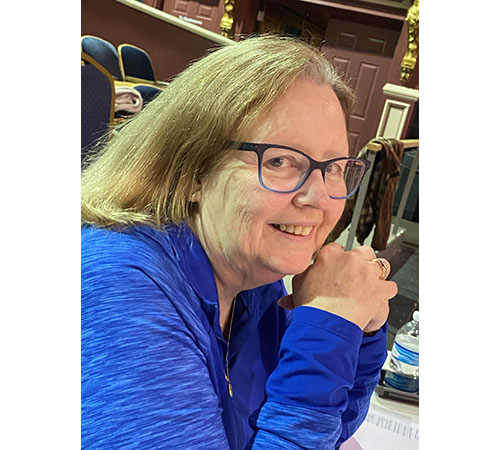 A year or two ago, Pat Jewell, long-time Tater Patch Players member, told the members about a play she wanted them to read. This was Messiah on the Frigidaire by John Culberson.

Pat volunteers in many capacities at the theater and has done everything from be on stage to costuming to working in the box office. She has also been an Assistant Director several times. Last year, when the Play Selection Committee was making their choices, they picked "Messiah" and decided it was time for Pat to make the big leap into directing if she was ready. And she was indeed.

Pat says that she was a little nervous at first, but when she held auditions, she had such a fine group of actors try out for the parts that casting the play was easy. She says, "They're all great people and they are working so hard to create their characters". One of a play director's jobs is blocking. This is deciding which actors move where and when they move. Pat says "The fine-tuning of blocking, and how long it takes" has been a big surprise.

Pat has nothing but praise for the cast. Three of them are new to Tater Patch, but two of those have acting experience elsewhere. "They have all worked so hard at creating their characters. They have made that part of my job really easy". Pat also wants to be sure that all those who built the set -- and they have created a mobile home on our stage -- and who are doing the rather interesting lighting have helped her so much. All these volunteers have been willing to work with her and smoothed any bumps out in record time.

This really uncommon comedy starts with a really bad job of hedge trimming and quickly becomes the story of a small community in outrageously funny chaos. Tater Patch Players is proud that long-time volunteer Pat Jewell has embarked on her directing debut and suggested this wonderful comedy to the troupe. Pat has also cast three newcomers to our stage and is really pleased to bring the whole cast of eight on stage for your enjoyment.

The new "Taters" and the more familiar ones have come together in a fine ensemble comedy cast as rehearsals have been ongoing for a few weeks. John Culberson, the author of Messiah on the Frigidaire, wants all of you to laugh out loud, and maybe think a little bit, too.

The result is going to be an unforgettable show -- one to make you laugh out loud, but also to think a little. Tater Patch Players is delighted to bring this show to our audience members for nine performances. The show dates are February 21, 22, 23, 28, 29 and March 1, 6, 7, 8. All the Sunday shows are at 2PM and the others are at 7:30.

Tickets may be bought in advance on line at www.taterpatchplayers.org or on the Tater Patch Players Facebook page. They may also be purchased in person at the box office beginning one hour before each performance. There are no more Flex Passes/Season Tickets at our theater, but individual show tickets are $18 for adults, $16 for seniors, $14 for students, and $10 for first timers to our theater.

For further information email the troupe at taterpatchplayers@gmail.com or call 706-253-2800.