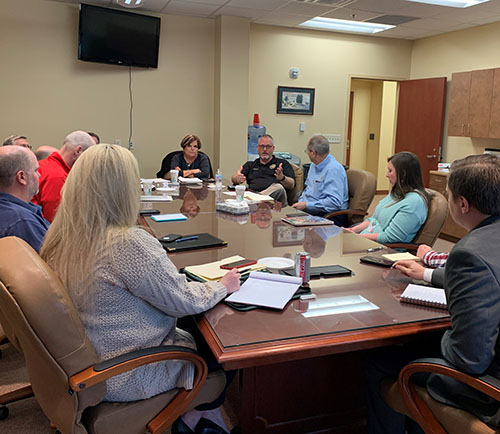 All involved wanted to strongly encourage all citizens, especially Senior Citizens and people with compromised immune systems, heed all warnings issued from the Centers for Disease Control and the Georgia Department of Health Services (www.cdc.gov and www.dph.georgia.gov) to help keep yourselves protected.

One of the primary topics discussed during the meeting involved testing procedures for the virus. Representatives from Piedmont Mountainside pointed out that testing was currently being utilized for people that are at a point of admission to the hospital with an order from their physician. These tests then must be sent to the CDC for confirmation. They also pointed out that flu levels are at near pandemic levels as well at this time and the symptoms can be similar. With the ever-changing information that is being released, these procedures could change rapidly.

Judge Weaver discussed her decision to issue an order on March 13th that continued all non-emergency hearings and court activities. The order also helped lay the foundation for how individuals entering the courthouse would be checked. This order was later followed by an order from the Georgia Supreme Court that provided similar instruction for all Georgia Courts. Judge Weaver also expressed concerns about the vulnerable populations that are being serviced through Accountability Courts in the Appalachian Judicial Circuit and how they could be followed up with.

Sheriff Craig discussed Jail procedures for intake / admission into the Jail as well as how his staff is closely monitoring their contact with the general public. He reiterated that all other public safety services must continue, regardless of outbreak status. He expressed concerns with the healthcare representatives about having the ability to have staff members that are at risk of exposure tested to ensure that they are not continuing to risk contamination of others.

To ensure the safety of all inmates and staff in the Adult Detention Center, all outside visitors to the jail are being discontinued effective immediately. He has spoken to the company that manages telephone and video visitation to have fees waived during the time period that visitation is not possible. This does not apply to attorney visitation.

Mayor Lawrence spoke about the decision to close public access to City Hall to limit exposure to public and potential contamination. He also described that emergency orders have been put into place to protect staff that are responsible for the operation of critical services like Water and Sewage. These procedures are in place to prevent disruption of essential services.

Chairman Jones discussed some of the same public access closures as Mayor Lawrence for the County Administration offices. He also discussed that the County is following protocols that were originally created in 2009 to deal with the pandemic flu crisis in preparation for upcoming events.

Probate Judge Lindsey indicated that many vital records can be obtained for the public online at www.vitalchek.com and other online sources for Probate and Magistrate Court can be found at www.pickensgacourts.org.

The overall message that was constant from all individuals within the meeting was to urge people to stay calm and not panic. This is something that we are all in together and we will make it through it.