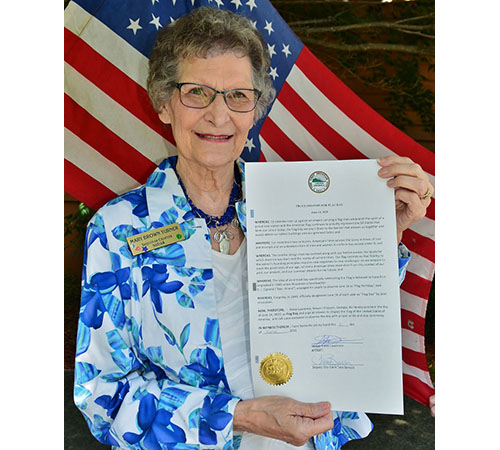 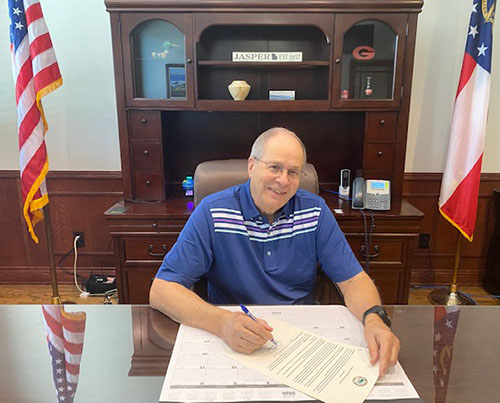 Jasper Mayor Steve Lawrence has proclaimed Sunday June 14, 2020 as Flag Day in Jasper following the national observance since Congress set the date by a joint resolution in 1949;

His proclamation, in part, calls us to unity. He writes, as we prepare to meet the great tests of our age, let every American draw inspiration from this symbol of our past, our present, and our common dreams for the future.

Our nation did not have a common flag in the early days of the revolution because they carried state or local flags. General Washington saw the need for a national flag that gave inspiration to the fighting soldiers.

On June 14, 1777 the Second Continental Congress passed a resolution stating that the flag of the United States be 13 stripes, alternate red and white, and that the union be 13 stars, white in a blue field, representing a new constellation.

Todays flag was designed by a 17-year-old in the 1950s and was a history class school project. Ohioan, Bob Heft, believing Hawaii would be the 50th state used his moms sewing machine and stitched 50 stars in a proportional pattern making a new flag.

Heft sent his new U.S. flag creation to his Congressman and the design made it to President Eisenhowers desk and was chosen to be the national symbol. The young man stood with President Eisenhower on July 4, 1960 when his vision of a 50 star flag was first raised.

Our flag, says the Mayor, reminds us that the fidelity to our nations founding principles requires new responses to new challenges and call upon everyone to observe the day with proper pride and due ceremony.

Celebrate Flag Day and comment a photo of your flag.
🇺🇸🇺🇸🇺🇸🇺🇸🇺🇸🇺🇸🇺🇸🇺🇸🇺🇸
Mayor Lawrence asks for Flag Day to be a symbol...