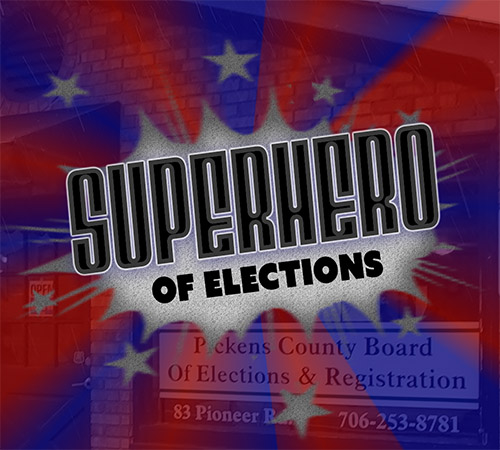 Elections officials across the state are preparing for a historic turnout electionin the middle of pandemicwith more than a possible 5.5 million total voters here in Georgia. In Pickens County, Julianne Roberts is leading the Pickens elections team to make sure every legal vote is counted. More than 40% have already voted early and another two million voters are expected to vote on election day.

"Our county election officials are the true superheroes of elections, said Secretary of State Brad Raffensperger. These dedicated election officials form the backbone of election administration in Georgia. It is thanks to their hard work and dedication that polls open, votes are counted, and Georgians get to share their voice at the ballot box.

"County elections officials stayed in their offices and worked with cobbled-together staff when most government workers stayed home as COVID-19 hit hard," said Chris Harvey, Georgia Elections Director. "With record turnout, and managing a new voting machine, these officials stayed at their posts and stared COVID down -- making sure that record-breaking numbers of Georgians are able to cast ballots."

In Pickens County, Julianne Roberts is responsible for making sure the countys 21,842 voters have access to the ballot. County elections officials process and mail absentee ballots, set up early in-person voting, and make sure polling locations are open, staffed, and equipped for Election Day.

County elections officials are likewise responsible for all the counting of votes. After polls close on Election Day, polling precinct managers will transmit their Election Day totals to county officials who will combine those vote totals with early, in-person votes and absentee by mail votes to produce the final results for the county.

In Georgia, county elections officials scan and count absentee by mail ballots at central scanning centers. Earlier this year, the State Election Board passed a rule allowing counties to begin scanning - but not counting - absentee ballots up to two weeks and a day before Election Day. The states new paper-ballot voting system, which divides the scanning of ballots and the tabulating of those ballots into two separate steps, made that possible. Tabulating the already scanned absentee ballots will be as simple as the push of a button after polls close on Election Day. However, some of Georgias counties will still have late arriving ballots to scan and tabulate even after polls close.

Early, in-person vote totals are tabulated by county officials as well. This counting process can also be done with the push of a button when polls close on Election Day, speeding up the time to get results.

On Election Night, county officials will have the best perspective on how long it will take for them to process and transmit all of the results from their county. Each county uploads the vote totals directly into the states Election Night Reporting website, which will be available on Election Night at sos.ga.gov. County officials likewise can decide in what order they upload the ballot totals to the state website and whether they wait until all ballots are tabulated to upload results or upload results piecemeal.

Georgia is recognized as a national leader in elections. It was the first state in the country to implement the trifecta of automatic voter registration, at least 16 days of early voting (which has been called the "old standard"), and no-excuse absentee voting. Georgia continues to set records for voter turnout and election participation, seeing the largest increase in average turnout of any other state in the 2018 midterm election and record primary turnout in 2020, with over 1.1 million absentee by mail voters and over 1.2 million in-person voters utilizing Georgias new, secure, paper ballot voting system.

MORE NEWS ------ BACK TO PICKENS COUNTY BOARD OF ELECTIONS AND REGISTRATION