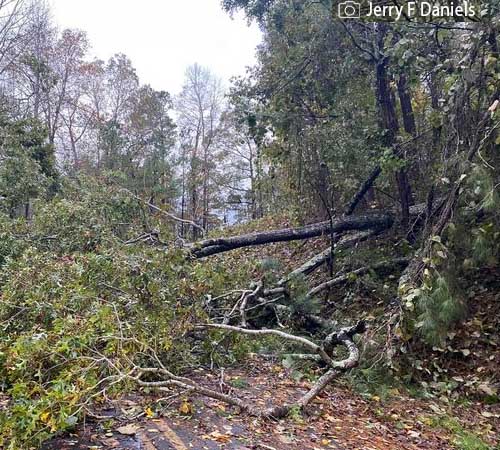 The end of October saw storms that caused widespread power outages and some property damage. Thousands of residents were affected and hundreds of crews from the local government agencies and utility companies worked for days around the clock as part of the restoration efforts.

Pickens County Government crews cleared roughly 110 trees downed by the storms. The debris affected 70 roads across the county. The crews will continue to chip trees on the right of way, but all roads are clear. Public Works will also replace a pipe that was damaged in the storm. Pickens County appreciates the dedicated workers who spent many hours away from their families to support our community!

During the month of October:

▸ The Pickens Animal Shelter brought in 61 new animals, and 57 went out through various forms of adoption. Animal Control responded to 12 cases.

▸ PCRD completed a successful basketball registration, 360 kids will be spread across 37 teams this season. Games are tentatively scheduled to begin on November 30th.

Until the next time, stay safe, and shop local!

MORE NEWS ------ BACK TO PICKENS COUNTY BOARD OF COMMISSIONERS