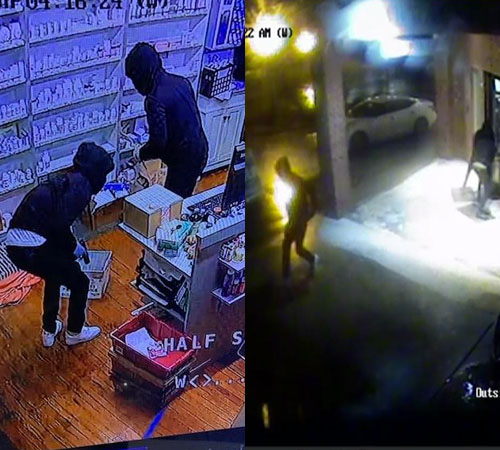 On January 25, 2021, at approximately 4:16 am, three individuals entered Bell's Pharmacy in Tate using a crowbar to pry open the front door. They were able to gain access to the pharmacy area of the store and removed a significant amount of narcotics. The three suspects were wearing black pants, black hoodies, and masks. One is seen holding a yellow crowbar and another one was holding a blue steel, semi-automatic handgun.

It appears the same group is responsible for other drug store burglaries in Covington, Newnan, and Gwinnett earlier in January.

Surrounding pharmacies, please take any necessary precautions and be on the lookout.

On January 25, 2021, at approximately 4:16 am, three individuals entered Bells Pharmacy in Tate using a crowbar to pry...

This morning, January 25, 2021, around 0435hrs, 3 males forcibly entered Ball Ground Pharmacy. The males were dressed in black pants, black hoodies and masks. Once in the pharmacy, the males took a significant amount of narcotics and an undisclosed amount of cash. The individuals then left the scene in a newer model white four door passenger car.

Cherokee Deputies initially responded after receiving an alarm call and a call from the business owner after he viewed his video surveillance and saw the males in the Pharmacy.

Ball Ground Investigators were notified and responded to process the scene and continue the investigation.
During the investigation information was provided that a similar incident occurred in Pickens County. Pickens county Detectives were notified and they provided video of the same individuals entering Bells Pharmacy in Tate around 4:19a.m. One of the males is carrying a yellow crow bar and one is holding what appears to be firearm.

In continuing the investigation it appears this same group is responsible for Pharmacy burglaries in Covington, Newnan and Gwinnett.
Please be vigilant and if anyone has any information on this incident please call 911.