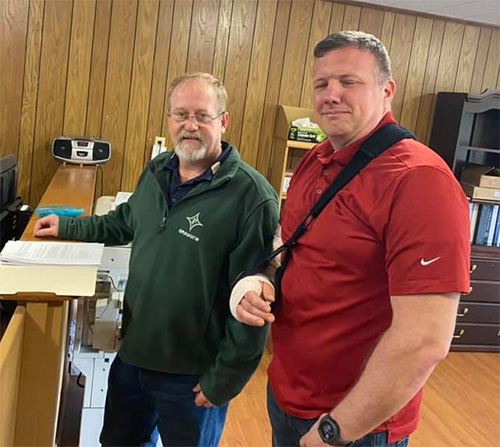 The purpose of the meeting was to share with concerned Pickens County Citizens information gained through recent Open Records Requests regarding the termination of Dr. Rick Townsend at superintendent. These actions involve the three school board members voting to terminate him and certain district personnel.

3/29/2021 - From Impact Pickens Facebook Page
"This morning Impact Pickens was served with legal papers contesting the recall of Steve Smith and Aaron Holland. As of today the recall is suspended until there is guidance from our legal team and or a ruling from the Superior Court."

3/26/2021 - Applications Approved by Pickens County Board of Elections. Recall petitions will begin.

3/19/2021 - Applications for Recall turned in to the Pickens County Board of Elections and Registration. They have five business days to certify the signatures.

Based on moral, ethical, and fiscal concerns, the first action of Impact Pickens is to spearhead the recall of board members, Steve Smith (elected) and Aaron Holland (appointed). Impact Pickens is in the process of securing legal representation to assist in the recall process and legal challenges that arise.

Call to Action
 By Friday, March 19th, Impact Pickens must have 100 sponsors of Pickens County registered voters for the initial recall filing.
 Once approved, Impact Pickens will seek the required signatures to continue the recall process.
 Additionally, Impact Pickens is actively raising funds in support of this project.