Veterans DayA Day To Give Thanks 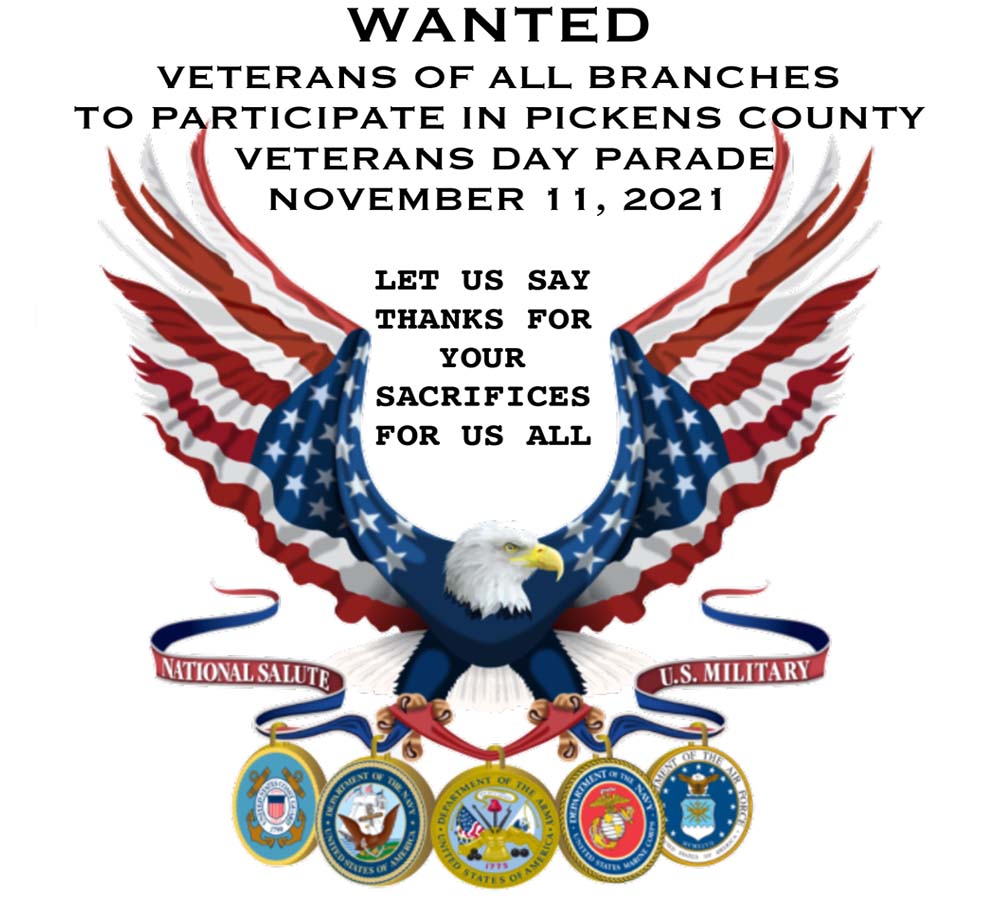 Do you know a veteran? Here in Pickens County, we are home to more than 3,000 vet.. about 12% of our total population. It's time we took the time to say thank you for their sacrifices to our country. One way you can do that is by cheering on the veterans and other participants in this year's Veterans Day Parade and attending the program held at the Veterans Memorial Park in Lee Newton Park immediately following.

This year's parade Grand Marshall is 93-year-old WWII Navy Veteran, Al Lawson. Lawson was honored as Grand Marshall three years ago when the weather was less than cooperative. Dressed in his original Navy uniform, he waved to the few onlookers peering from under their umbrellas as the "parade" of cars only drove slowly down Main Street. So once again, we will honor him and all veterans with a real parade.

The parade will begin at 10 am going down Main Street and ending at the Veterans Memorial Park. There really is something special about a parade that stirs the patriotic spirit with waving flags, floats and marching bands go by. It's even better when you are part of the parade!

The American Legion hosted parade is still looking for more participants. Let's make this the best parade ever. There's no entry fee and the only limitation is no political entries or offensive displays. For safety reasons, we ask that candy only be thrown from walkers not moving vehicles. We want this to be a family friendly parade that everyone loves. To find out more contact parade coordinator, Steve Whitt at stevewhitt@etcmail.com.

The Veterans Day program will begin once the last parade element arrives at the Veterans Memorial Park. Pickens High Band and Chorus will perform several patriotic pieces before the guest speaker, Mayor of Jasper, Steve Lawrence, also a veteran, gives his address.

Other speakers will include Frank Leist, treasurer of Pickens Veteran Memorial (PCVMP), and Christine Twiss, who will present a quilt of Valor, Ron Wheeler, president of PCVMP, Larry Brown, Vice President of PCVMP and Gerald Faulkner who will give the invocation. Following all speakers, there will be a 21 Gun Salute performed by members of DAV Chapter 47 and TAPS played by Pat Gallagher.

We should thank our veterans every day of the year, not just Veterans Day. But certainly, it is a day we give recognition to the veterans. Let's all make it a special day for those who served and are still serving our great country.

Flags will be distributed to those on the side lines. Wave them proudly as you say thanks.